Cardano is a proof of stake (PoS) blockchain founded in 2017 by Charles Hoskinson, who also co-founded Ethereum. It is one of the first blockchains to have a functioning PoS consensus mechanism, but has not seen much traction post launch. Only last year the blockchain gained primitive smart contract support, lagging behind its competitors, but there is some news that might help increase the platform’s performance and in turn its adoption.

The long anticipated Vasil upgrade will soon be going live on the Cardano mainnet. The upgrade is part of the current development phase called Basho, which is focused on improving the performance, resilience and flexibility of the blockchain. The hardfork is set to take place at the end of July. 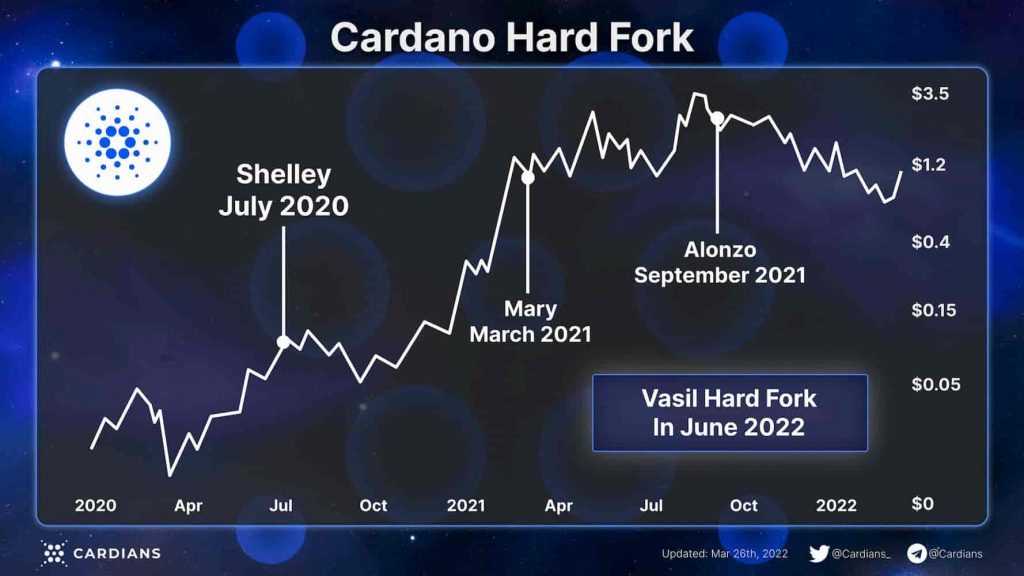 The Vasil hardfork, named after a Cardano community member who passed away last year, is part of the eleven planned scaling proposals to be implemented in 2022. According to Input Output, Vasil is the most significant network upgrade since the deployment of staking. Diffusion pipelining and upgrades to Plutus are the most anticipated features of the upgrade. In a nutshell the diffusion pipelining will add scalability by increasing block sizes, and the upgrades to Plutus (Cardano’s native programming language) will result in faster and more efficient dApps.

All in all, these features will enhance Cardano’s network throughput, open up new developer use cases and offer significantly improved DApp user experiences.

The Vasil upgrade went live on Cardano’s testnet on July 3rd. Developers, stake pool operators and exchanges have about 1 month to test the upgrade and make adjustments before it goes live on Cardano mainnet. If everything goes according to plan we can expect the Vasil hardfork to occur as soon as the end of July or the start of August.

If you’re an $ADA holder using Cardano for transactions and DApps, you won’t have to take any action prior to the upgrade.

Cardano is currently ranked at #8 on CoinMarketCap with a price of $0.454 per token. Despite its large market capitalization the smart contract platform has not gained much traction since its inception. It was only last year the platform actually gained primitive smart contract support. Cardano’s slow rate of adoption could be attributed to its conservative approach to development. One strong point of Cardano is their marketing, which does a good job at attracting retail market participants, as reflected in its market capitalization. The price of the $ADA token might be affected short term by the news surrounding the upgrade.

While it’s hard to predict the outcome of events such as the Vasil upgrade, we do not expect much to change immediately after the upgrade. Most of its improvements are back-end focused and will take time to see effect. The problem Cardano faces with slow development is most detrimental to its growth. If IOHK keeps developing at the same slow pace it will give its competitors even more time to get ahead of the curve, as they have been doing in the past few years. Time will tell if Cardano is able to deliver on its promises.